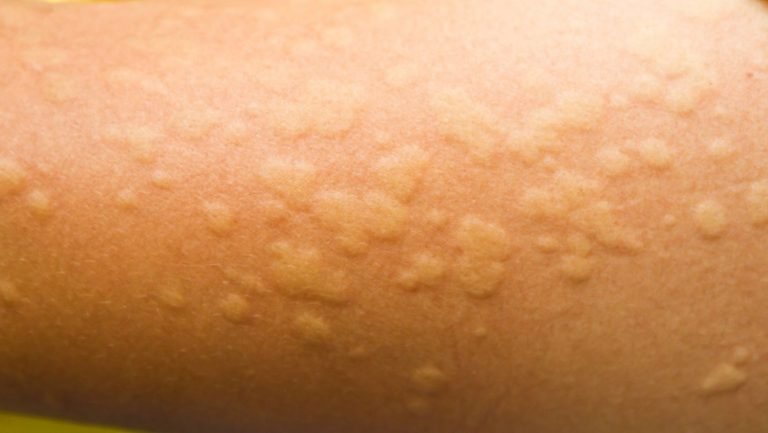 Urticaria and allergies treatment, most commonly called as hives that are usually red, itchy and raised welts caused on the skin which might appear in different shapes and sizes, each of which characteristically lasts for no longer than 6-12 hours. Hives are very common among the people and most of the times their cause is very elusive. Hives could alter their size rapidly and move around, they can also disappear in one place and reappear in the same place within a matter of hours. For the patients it is an important point to note and tell the doctor that, the hives don’t stay at one place for longer and 24 hours , as that could mean something different altogether, but looks same.

According to the best doctor for urticaria in Delhi, hives appear in the skin when histamine and various other compounds in the body are released from the cells. Histamine causes the fluid to leak from the local blood vessels which lead to the swelling of the skin.

There are different treatment options for hives some of which are listed as under:

According to the best doctor for urticarial problems in Delhi, antihistamines are considered to be the best as well as first-line treatment for hives. This is a kind of drug which works by the way of suppressing histamine. For most of the kinds of this problem, over the counter antihistamine is believed to provide enough relief. Various other older generation antihistamines such as Allegra, Claritin, Xyzal, Zytec, etc. are also administered to a person suffering from hives. Another older antihistamine, Benadryl is also suggested, however, it is usually avoided during the day time because of its sedating effect. It is important to use these with caution and be even more careful when using them for young kids and elderly patients.

A number of studies have claimed that Eastern Medicines, especially Chinese herbal medicines, and traditional indian system of medicine, like ayurveda and siddha are widely used for the treatment of hives. The best thing about using Chinese therapy for the treatment of hives is that these medicines are totally organic in nature and hence they are safe to use in qualified hands. The herbs such as Xiao Feng Tang as well as Gui Zhi Tang are widely used for the treatment of hives. Apart from this, Chinese acupuncture therapy is another effective treatment option which addresses the problem really well. Though the names of medicines are mentioned, one should never use them on their own as even herbs can cause their share of problems when not used judiciously.

Since most of the cases of hives are related to allergy, they can last for six weeks and relapse themselves in certain instances. Thus, simply removing yourself from all the things which trigger the allergy is considered to be the best alternative to treat the problem. It is suggested that the use of a cold compress can soothe the itch and reduce the swelling caused as a result of hives. some of The best doctor for urticaria in Delhi also suggest to wear loose clothing and avoid all kinds of fabrics such as wool, denim or linen in order to let the skin breathe, and avoid Non- vegetarian and seafood along with very spicy food and processed food. Diet even if it is not a cause, will play a significant role in aggravation of symptoms and their propagation.

Using the simplest naturopathic way of detoxing the gut by, scientific fasting and hydration in a planned manner also helps in reducing the symptoms of urticaria.